Posted by LaCedric Williams on June 27, 2014 in Inspiration |No Comments 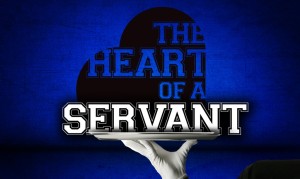 In our series Elijah: The Prophet of Courage and Confrontation we find that after a three year period of being hidden away from public view, first by the Brook Cherith and then at Zarephath, Elijah is brought back into the spotlight. When he first appeared before the throne of King Ahab and announced the drought, he was a man of faith. However, as he passed through the trials of the dried brook, the empty meal barrel and the dead son, Elijah was transformed into a man of God.

He is a man wholly dedicated to the Lord God! As he reenters the public eye, Elijah’s first encounter is with a fellow believer by the name of Obadiah. While both are believers, the contrast between these men is striking! Elijah is seen to be a faithful servant of God, while Obadiah is pictured as a mere hireling, that is, a gatekeeper. He is caught between two worlds.

Sadly, there are many people like Obadiah in the modern church. People who have straddled the fence.

I would like for us to listen in on this encounter between Elijah and Obadiah. In this passage, we will meet a hireling and a servant. In fact, we may even meet ourselves this morning.

Is Based on The Commander – After all this time, Elijah is still serving the Lord! All the trials and difficulties he has had to endure have not dulled his sense of service to God Almighty.

(Ill. Some folks just need to get it settled in their hearts who they really serve anyway! Friend, who is the Lord of your life? Can you honestly say this morning that God is in control? Or, would you have to admit that, for the most part, you call the shots in your life? Who is your commander today?)

Is Based on The Command – “Go, shew thyself unto Ahab;” For Elijah, this may have been a more difficult command than the one to hide himself, 17:3.

Is Based on The Comfort – Elijah may not know all the details, but he is reminded that God is still in control. God promises Elijah that if he will present himself to Ahab that rain will come again. “and I will send rain upon the earth.” Basically, God is telling Elijah, “Things are going to work out!“

(Ill. Again, I will say that we do not always know what God is doing. God’s commands are always accompanied by God’s provisions!

Where God leads, He always promises His provision and His presence. He will not leave us out there alone.)

V. 3 Is Based on His Situation – “And Ahab called Obadiah, which was the governor of his house. (Now Obadiah feared the Lord greatly:”

Friend, if all the pretense and all the window-dressing were taken away this morning, can you honestly say that Jesus is your Lord? The answer lies in how you live your life!

These are hard questions, but if they are answered honestly, they will reveal who is the Lord of our lives!)

V. 4 Is Based on His Secret – Obadiah holds a high position in the court of Ahab. He is in a position that requires trust and faithfulness, but Obadiah has a secret. Actually he has two secrets that if Ahab knew, would have meant death for Obadiah. Let’s find out what those secrets are.

So it is clear that Obadiah has a few positive marks on his record. However, it is sad when people serve God in secret! It is a shame when those who know the Lord sell out to the world, the flesh and the devil. How many in this very room are guilty of the very same things? Because of a desire to fit in with the crowd, because of a job, or to keep a friend, we have chosen to keep silent about what we really believe.

V. 5-6 Is Based on His Service – In these two verses, we find Obadiah actively involved in service to Ahab. Basically, Obadiah is guilty of two great errors.

(Ill. These verses tell of the meeting between the hireling and the servant. Here Ahab’s boy meets God’s man and what a contrast there is between the two. Let’s look for a few moments at Obadiah’s selfish service.)

A. V. 7 Obadiah’s Identification of Elijah – Obadiah recognizes the man of God when they meet in the way. Obadiah is quick to show reverence to the man of God, but of course, no one else is around to see it!

B. V. 8-9 Obadiah’s Indictment of Elijah – Elijah sends Obadiah to tell Ahab that he has returned.

C. V. 9-14 Obadiah’s Indifference toward Elijah – In these verses, Obadiah begins to offer up one excuse after another as to why he cannot do what Elijah is telling him to do. Let’s dissect this man’s excuses and see if they hold water!

V. 9, 12, 14 His Personal Fears – His first objection is that if he does this thing, he will be put to death for it. Apparently, he does not believe that God has the ability to protect him from Ahab.

(Ill. If you ever come to the place where you start to believe that God cannot take care of you, you need a checkup! It may be that you have stopped trusting God and have started looking to other sources to meet your needs.

(Ill. When you come to the place in your spiritual life where you have to point back at what you used to do, instead of being able to see what you are currently doing, you are in deep spiritual trouble. Sadly, many believers are right there this morning! You hear things like, “I worked in Bible School for years, now it’s time for someone else to do it!” Or, “I taught that class for a long time, I need a break!” Or, “I used to go to church; I used to serve God; I used to be faithful!” What about today? What are you doing for God this morning? Don’t fall into the trap that claimed Obadiah! Serve God in the here and now, not the then and when!

D. V. 15-16 Obadiah’s Indulgence of Elijah – At Elijah’s insistence, Obadiah reluctantly agrees to go find Ahab and tell him the news. As Obadiah walks away, he is never heard from again. Did Ahab kill him as he feared? Probably not! Most likely, he simply faded back into the woodwork and continued to live his life of compromise and disobedience. His is a life that could have been greatly used of the Lord, but because of his reluctance, his lack of faith and his compromise with the world, he was a man who never amounted to much for the glory of God. Think about this: later in this same chapter, Elijah is all alone when he confronts Ahab and the prophets of Baal on Mount Carmel. If Obadiah had been all he claimed to be, he would have been right there with the man of God!

CLICK HERE to go to our Words for Living Christian Resource Superstore for Prayer Devotionals. If you want to save 10% on most items including best sellers….subscribe to our newsletter and we will send you news on discounts and sales.