Posted by LaCedric Williams on July 14, 2014 in Inspiration |No Comments 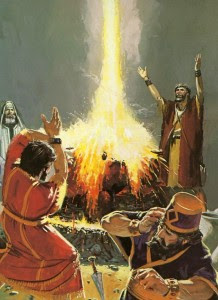 We have had the privilege of observing God as He trained a man named Elijah. We saw bring him from nowhere, set him before a king and use him to strike fear into a nation. We have seen God send him through one trial after another to teach him total dependence upon the power and provision of God. We have seen the contrast between this man Elijah and others who claimed that they knew the Lord. We have learned much about this man. Yet, all we have seen Elijah go through was in preparation for the events we have read about this morning.

All the training, all the trials, and all the trusting have been to bring Elijah to the place where he could stand in the pure power of God and show a lost nation that Jehovah, not Baal, was Lord of all. You see, the entire nation of Israel, with the exception of some 7,000 faithful people, 1 Kings 19:18, had given themselves over to the worship of the false god Baal. Things were so bad that even the king and the queen of Israel were leaders in promoting the worship of these idol gods. However, God had not forgotten His investment in His people! He had not forgotten how He had chosen them out of all the other people on the face of the earth. How He had brought them out of Egypt and led them through the wilderness. He remembered giving them the land, the Law and the covenants of promise. He never forgot for and instant that they were His people and that he had plans for them.

For Elijah, this was an event that required great faith and courage, but he had been adequately prepared by the Lord for a task such as this. In fact, it was time for Elijah to prove that he was who he was rumored to be. It was time to put up or shut up. In other words, it’s Showtime!

This passage has much to say to the church this morning as well. We live in a day of half-hearted service, when people serve the gods of self, materialism, recreation and pleasure more than they serve the God of Heaven. And, I am not just talking about the world. The same mentality that drive the world today has invaded the church!

A. V. 17-20 Elijah Challenges the King – This meeting between Elijah and Ahab is an interesting one. Ahab is the king of Israel. He has chosen to lead the people of God away from the worship of God into the worship of a false God Baal. Elijah, on the other hand, knows nothing of compromise! He is totally sold out to the will of God for himself and for his nation. Why not just kill him and be finished with it? I believe that Ahab has come to believe that the drought will not end unless Elijah prays for it to. Let’s listen in on their conversation and glean from it.

1. V. 17 A Confrontation – When Ahab sees Elijah, he accuses him of “troubling” Israel. This word refers to one “who stirs something up, or causes a disturbance.” However, it also carries the meaning of “a snake or serpent.” This is equivalent to Ahab calling Elijah “a snake in the grass.” there is no love lost between these two men!

(Ill. So it is with the man of God! People will get angry when truth is preached from the pulpit. They fail to understand that when God’s man tells them the truth, he does so because he loves them and God loves them. You see, the truth has the power to set you free, John 8:32. The man who tells you the truth is not your enemy. The man who tells you all is well when you are wrong is not your friend!)

2. V. 18 A Condemnation – Elijah tells Ahab that the drought is really Ahab’s fault! In reality, Ahab was the trouble maker, Elijah was just the trouble shooter!

(Ill. Why is it that God’s people forget that there is a price on sin? When we make wrong choices in our lives and wander away from God, why are we surprised when He chastens us? After all, isn’t that what He promised to do?

3. V. 19-20 A Challenge – Elijah commands Ahab to send for the people of Israel, the 450 prophets of Baal and the 400 prophets of Asherah. Elijah even points out the fact that king of Israel is using his own resources to feed these false prophets, v. 19. In verse 20, Ahab accepts the challenge and goes to round up the participants.

(Ill. I just want to point out the fact that Elijah the prophet spoke 8 times during this event and each time he spoke, he issued a command. Why didn’t someone kill him and shut him up? Because as long as you are in the will of God, you are invincible until the Lord gets through with you, Isa. 54:17.)

B. V. 21 Elijah Challenges The People – Now the people and the prophets have heeded the call of Elijah and they have gathered themselves on top of Mount Carmel. Once they are there, Elijah ignores the prophets of Baal and turns his attention to the people of Israel, God’s chosen. Note three aspects about his challenge to the people.

(Ill. We might as well come to understand right now that divided allegiance is a wicked as open idolatry! This is proven by Christ’s condemnation of the church at Laodicea, Rev. 3:14-22.

(Ill. This is the same challenge we face this morning! Many who claim to love the Lord are also holding hands with the world, the flesh, material possessions or whatever. This is a contradiction! Either God is the Lord or He isn’t. If He isn’t, then those other things you hold to must be. The bottom line is this: you have to make a choice! Who will you serve? Who is really the Lord of your life?

C. V. 22-24 Elijah Challenges the Prophet – Before Elijah finishes, he presents a challenge to the prophets of Baal. He calls upon them to put their faith in their god on the line. He tells them “its show time!)

1. V. 22 The Teams – Elijah is just one man against 450 men. Yet, he is willing to stand for God. Talk about courage! Talk about guts! Talk about faith! Where are the Elijah’s who will stand against everyone if need be, so they can stand with God? This is what I mean when I say we have to choose sides! Let us not fear the fact that we are outnumbered. Let us not waiver because it may appear that we stand alone! If we stand with God, we are never alone,

2. V. 23-24a The Terms – Elijah lays out the challenge to the people and the prophets. They will offer a bull and pray. The God who answers by sending fire from Heaven will be worshiped as God. Of course, Elijah tells them that they are to put not “fire under“, v. 23.

3. V. 24b The Tragedy – The whole tragedy lies in the fact that the people are even willing to consider that Baal might be real.

(Ill. Before we come down too harshly on these people, maybe we should admit that we are often guilty of the same things. When we allow life and all of its distractions crowd God out, we are as guilty as they are.

(Ill. The challenge extended and accepted. Now the contest gets underway.)

1. V. 25-26 Their Ministry – From early morning to noon these false priests prayed, screamed and called on Baal, but no fire came down and no answer was given to them at all. They appeared to be wasting their time.

2. V. 27 Their Mockery – When Elijah saw their foolishness and the futility of what they were doing, he stepped forward and mocked them and their god. He said, “Surely he is a god! You better cry louder! Maybe he is doing something else and is too busy to help you! Maybe he left town or is out hunting. Maybe he is asleep and you need to wake him up!”

3. V. 28-29 Their Misery – Elijah’s mockery sent these men into a fit! They screamed, jumped, even cut their bodies in an attempt to get a response from Baal. However, the Bible tells us that there was no voice, neither any to answer, nor any that regarded! That last phrase means that by this time, even the people watching this spectacle had lost interest in what these false prophets were doing. (Ill. Just try to imagine this scene! 450 crazed prophets of Baal, prophesying, yelling, dancing, jumping, and cutting themselves all in an effort to get the attention of a god that didn’t even exist.

(Ill. A parallel to that are those people who live their lives in a frenzy to acquire and do more than their neighbor, only to die with nothing.

B. V. 30-38 The Power of the Faithful Prophet – After this pitiful spectacle, the faithful prophet Elijah steps forward. What he does teaches us about the ministry of faith in God and faithfulness to God in service.

1. V. 30-35 The Preparations – Notice what Elijah did to prepare for this event. Several things stand out to us this morning.

2. V. 36-37 The Prayer – The Baal prophets had prayed at least 6 hours and nothing had happened. Elijah stepped up to his altar and prayed a short prayer. His prayer was constructed to accomplish three things.

Elijah could have prayed for rain, but he did not. Why? He knew that as badly as rain was needed, the people needed revival more!

3. V. 38 The Proof – When Elijah finished praying, God answered in a spectacular fashion. Note the order in which the elements were consumed. If the items had burned from the bottom up, it might have looked like man did it. However, everything burned from the top down, proving it was the work of God alone!

(Ill. Please let me say to you that we must never underestimate the power of a totally dedicated life! If you are sold out, the Lord will use you greatly!)

(Ill. Did you notice that when the fire fell, it fell on the sacrifice and not on the sinners?

III. V. 39-40 BECAUSE OF THE SACRIFICE THE CRISIS ENDED

A. V. 39 BECAUSE OF THE SACRIFICE the Repentance of the Wayward People