Posted by LaCedric Williams on July 31, 2014 in Inspiration |No Comments 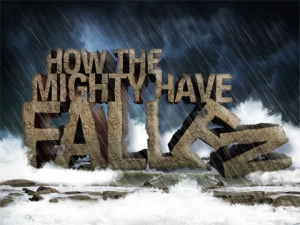 We have followed the prophet Elijah through many valleys and across a few mountain tops. He has been at the lowest of lows and he has enjoyed the highest of highs. He has witnessed the power of God on a personal level and on a national level. We have seen him as the Student Servant and the Champion Soldier. In this chapter we will meet the Depressed Saint. In chapter 17 we saw his humility. In chapter 18 we saw his heroism. In chapter 19 we are confronted with his humanity. We are given startling evidence of this by the words James used concerning Elijah, “Elias was a man subject to like passions as we are“, James 5:17.

In essence, what we see here is a picture of a man who has pushed himself beyond his physical and emotional limits. Elijah is in a period of depression. In this chapter, we are allowed to see a side of Elijah that both shocks us and helps us.

It shocks us when we realize that great men and women go through periods of deep, dark depression. For instance, Winston Churchill said, “Depression followed me around like a black dog all of my life.” A young lawyer in the 1800’s suffered such a deep depression that his friends did everything they could to keep all razors and knives away from him. He wrote these words, “I am now the most miserable man living. Whether I shall be better, I cannot tell. I awfully forebode I shall not.” This lawyer later became the 16th president of the United States. His name was Abraham Lincoln. Even a man by the name of Charles Spurgeon was given to periods of depression. History tells us that there were times when Spurgeon would be so depressed that he would refuse to leave his home to go to church. On more than one occasion, his deacons had to come and physically carry their pastor to the pulpit.

While these accounts shock us, they also serve to help us. How? They remind us that depression is a common experience. It is something that often happens in life. In other words, if you go through a time of depression, you are not alone.

With these thoughts in mind, let’s look at this account from the life of Elijah and think about the subject, How The Mighty Are Fallen. What happens when depression comes and how can we handle it?

In these first four verses of this chapter, we will witness THE MISERY OF THE PROPHET

A. After the great events on Mount Carmel, Ahab returns home to his wife Jezebel. She is, no doubt, waiting to hear the news that her prophets wrought a great victory. After all, she probably saw the fire fall from Heaven and now she see the rain. She must believe that Baal is responsible for all these things. Instead of good news, Ahab tells her that it was Elijah who won that day and that he has even slain her priests! When she hears this, she is infuriated! She takes matters into her own hands and decides that Elijah must die!

(Ill. I just want to interject a few thoughts right here. Jezebel is a typical domineering woman. Her actions prove this to be true.

(Ill. Besides this, Ahab paints another picture for us. He had been confronted with the truth that God was greater than Baal. He knew that, like the people of Israel, he should fall before the Lord in humble repentance. Yet he refuses to do so. When he arrives home, he even refuses to give God the credit for what transpired on Carmel, v. 1. He gives all the glory to Elijah!

B. When Jezebel hears the news that Elijah has slain her prophets, she sends him a warning that she is going to have him put to death.

(Ill. His behavior is irrational, but that is one of the effects of depression on the human mind. It causes the sufferer to think in ways that are not normal. Depressed people often do things that defy logic and description. Yet, to them, their actions make perfect sense.

A. Elijah leaves his servant at Beersheba and goes alone another day’s journey into the wilderness. Sits down under a juniper tree, throws in the towel and asks God to take his life.

B. Elijah displayed some characteristics in this event that show us that his thinking was anything but rational. Elijah is at the end of himself and it shows.

A. Elijah attempts to rationalize his request for death by saying that he was no better than his fathers. The question I have is “Who told him that he was better in the first place?” Apparently, Elijah had come to believe that he was something special. After all, hadn’t God used him in a great way? Hadn’t he trusted God and seen the impossible done time and again? Yes he had, but he was no better than anyone else. It seems to me that Elijah must have thought that Ahab and Jezebel would repent when they saw what God did.

What is Elijah’s problem? Pride! He was guilty of believing his own press! He was caught in the backwash of a great victory and he may have felt as though he were invincible.

B. Ill. When we consider the great ministry enjoyed by Elijah, we may wonder what got him into this shape. I think there are two primary reasons why Elijah ended up under that juniper tree asking God to take his life. These are the same two reasons that can lead to serious problems for you and me if we do not heed the warning signs.)