Posted by LaCedric Williams on October 11, 2014 in Inspiration |No Comments 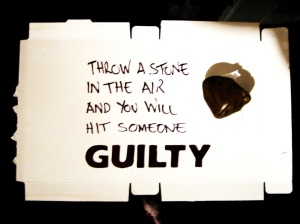 Our text tells us about a guilty woman. She is brought trembling into the presence of Jesus, she knows in her heart that she is about to be stoned to death.

When this woman met Jesus, her life changed forever. Her sin was forgiven. Her guilt was removed. Her fear was turned to peace. What appeared to be a hopeless case suddenly became a time of forgiveness, salvation and joy. I want to examine The Case of the Guilty Woman today.

Let’s imagine the scene. It is very early in the morning. Jesus is sitting in the Temple. A crowd has gathered around Him as He teaches them the word of God. It is a scene of peace and tranquility.

Suddenly, the quiet is shattered by an approaching crowd. Angry voices are shouting. There is the sound of a struggle. With a trembling voice, a woman cries out for mercy.

In the next moment the crowd reaches Jesus, and a disheveled, weeping woman is thrown at His feet. Her accusers launch into their attack against her. They claim to have caught her engaged in a vile sin. They bring her to Jesus and they demand that He answer a simple question: “We caught this woman in the act of committing adultery. The Law of God says this woman should be stoned to death. What do you say about this woman and her sin?”

Notice with me the facts of her story that teach us about the marvelous grace of God as we consider The Case Of The Guilty Woman.

THE SINNER AND HER GUILT

The Woman and Her Sin – Verse 4 This woman was caught in “the very act” of adultery. Evidently, this is woman was betrothed to be married. I say that because betrothed women who were found guilty of adultery were stoned, while married women were strangled. She was caught having sexual relations with a man to whom she was not engaged. She was guilty of a terrible sin, of that there was no doubt. Her guilt is beyond question.

The Woman And Her Shame – This poor woman was grabbed up from the place where she was engaged in adultery. She is exposed physically. She is humiliated.

The Woman And Her Sentence – This woman was guilty, and the men who accused her were correct; she deserved to die. The Law of God said so:

THE SOLICITORS AND THEIR GUILE

Verse 6 Their Shameful Scheme – These religious legalists were attempting to pin Jesus on the horns of a dilemma.

Their Shocking Setback– Their scheme might have succeeded had they tried it with someone else, but they were dealing with the Lord Jesus Christ, and He refused to play by their rules! When they attacked Jesus they came against a man Who knew what was in their hearts. Notice how He responded to their accusations.

Verse 7-9 What Jesus Revealed About Them – When Jesus did speak, He said, “He that is without sin among, let him first cast a stone at her.” He stood back up and He said, “Stone her! But let the man without sin be the one to cast the first stone.” Jesus wasn’t requiring that these accusers be sinless. If that was the case then no human would ever be able to render judgment in any matter, even in a court of law.

THE SAVIOR AND HIS GRACE

If you will allow me, I want to backtrack for a moment. As I mentioned a moment ago, we will never know, this side of Heaven, just what Jesus wrote on the ground that day. And guess what? It doesn’t matter! What matters is this statement in verse 6, “But Jesus stooped down…”

When Jesus stooped that day:

Stooping was not a new thing for Jesus! He often stopped during His ministry.

His stooping is a picture of His grace. Let’s notice how the Lord extended grace to this sinful woman. When Jesus stooped here, He stooped for this woman. When He stood up, He stood up for her too!

Verse 9b-10  How Jesus Confronted Her – When the last rock had hit the Temple floor, Jesus stood up and faced this sinful woman. Standing there before her, He was the only One the world has ever known Who was qualified to take up those stones, and execute her for her sins. When she faced Jesus, she was facing the ultimate judge!

I am sure that He has given you many opportunities in this life to come to Him. What have you done with those opportunities? You will either bow to Jesus Christ here, when you come facet o face with Him, or you will bow to Him when you face Him on judgment day. Which would you rather it be? In the end, it always comes down to just you and Jesus. And, what you do with Him will determine where and how you spend eternity, 1 John 5:12.

Verse 10-11  How Jesus Cleansed Her – The only One qualified to throw a stone refused to! Jesus dealt with her on the basis of mercy and grace. She deserved judgment, but He gave her forgiveness! Those religious men condemned her and said she was worthy of death. Jesus saw someone who was worthy of His love. He saw someone worth saving.

Jesus looked at that guilty woman and said, “Woman, where are those thine accusers? hath no man condemned thee?”

His question is this, “Are there any witnesses against you? Has anyone passed sentence on you?”

Her answer is simple, “No man, Lord.”

His forgiveness is instant, “Neither do I condemn thee.”

When this woman looked to Jesus by faith and received the grace He offered to her, her salvation was instantaneous. That’s how it works for all of us! Rom. 10:9 says, “That if thou shalt confess with thy mouth the Lord Jesus, and shalt believe in thine heart that God has raised Him from the dead, thou shalt be saved!” It doesn’t get any easier than that! Even small children can comprehend that truth and make it real in their lives. What about you? Have you taken this step of faith?

Everyone who comes to Jesus by faith receives forgiveness for all their sins and absolute liberation from all condemnation, Rom. 8:1, 1 Cor. 6:9-11. Beloved, that is shouting ground!

How Jesus Completed Her – When Jesus cleansed her, He said, “Go and sin no more.” All of her life, this woman had been subject to Satan. She had been a prisoner of her own lusts and desires, Eph. 2:1-3. Jesus came to her and unlocked the shackles that bound her to her sin, and He set her free!

How her life must have changed! Think of her years later as she looks at her children and her husband. A family she would have never had if she hadn’t met Jesus. Think of the other families that were spared the pain of her adulteries.

Jesus specializes in taking wasted, ruined lives and saving them by His grace and restoring them to usefulness. Every person who comes to Jesus for salvation receives a new life, 2 Cor. 5:17.

In verse 10 Jesus called her “Woman”. He only used this term twice in the Gospel of John. Once in chapter 2 and again in chapter 19. Both times it was a title of honor applied to His mother Mary. It would be equivalent to the term “lady”. It was a term of honor given to a woman worthy of honor.

This woman was anything but a “lady”. Jesus has a way of seeing things that are not as though they were. In other words, He did not see this woman as she was, He saw her as she could become through Him! Jesus took a wicked, godless, carnal, sinful woman and turned her into a lady!

When Jesus looks at a life, He sees a person as they can become through faith in Him. Just so you know, your life doesn’t have to remain like it is right now. It can be better, it can be new, it can be pleasing to the Lord, but only if you will come to Jesus!

How was all this made possible? Why did the accusers drop their stones and leave the Temple? Why was the Lord able to forgive this sinful woman? Why is He able to offer people like us His grace and His salvation?

He is able to do all that and more because He stooped. Think about it!

When He did, everything changed!

When He stooped and stood up, sin, death, Hell, Satan, and the grave were all defeated!

Praise the Lord! Our God is the God Who stoops, and then stands again!